The Prime Minister’s Awards for Excellence in Early Childhood Education recognize outstanding work in child development, innovation, involvement with parents, families and the community and for commitment and leadership in the field. Certificates of Excellence and Certificates of Achievement are awarded annually at the national and regional levels.

Khan received the Certificate of Excellence for her contributions in support of child development as well as for her involvement with parents, families and the community. Her philosophy is to recognize each child’s abilities and uniqueness and to help them reach their potential in life. Khan currently works at the Little Scholars Montessori, a licensed child care centre for children aged 18 months to 6 years old. She believes in getting parents involved in their children’s education. Khan was recognized for encouraging “The Family Tea” approach where families and children get together for tea and also for launching “The Peace Table” initiative which encourages children to discuss their feelings and talk through their problems. 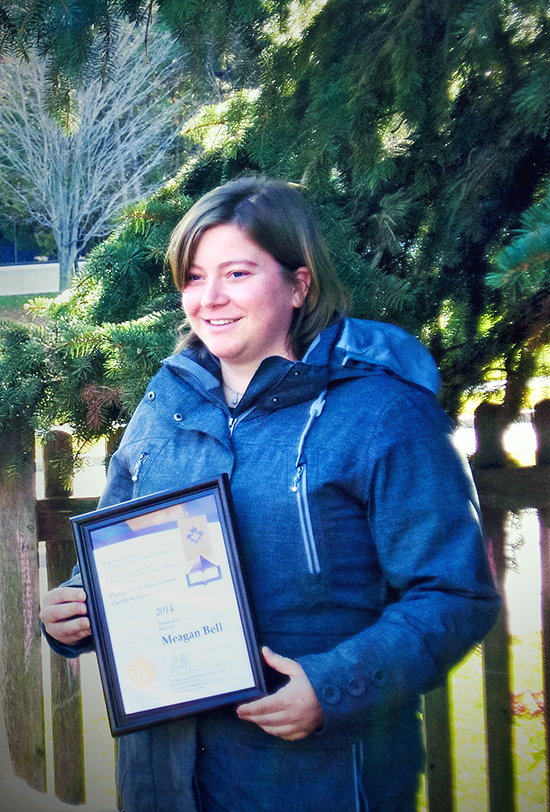 Bell has worked for the past six years at the Kanata Research Park Family Centre, a child care and early learning centre for children aged 18 months to 5 years old. She is well known among her peers for engaging her students in memorable learning experiences through hands on activities. As a 2014 recipient of the Certificate of Achievement , Meagan Bell “feels honoured to be recognized by other professionals.”

“Being involved in early childhood education has always been something important for me,” says Bell. “It is such an amazing thing to watch a child discover something new. I try to work on whatever is going to speak to the children’s hearts.”

Bell was specifically recognized for her work in intergenerational programming and for introducing an e-portfolio tool called Storypark at the centre. Storypark can be used to record and share children’s learning experiences with families and the community. “This tool has allowed us to communicate more with families,” says Bell. “It’s a great way to build partnerships between families, children and us.”
Bell believes the Certificate of Achievement reflects a group effort. “It’s a reflection of the work done at the centre and how we’re trying to implement best practices. The opportunity to collaborate with others and share experiences is something I value and always look for.”